The one-day count, conducted in January, suggests more than 4,400 people were experiencing homelessness in Maine on January 25th. 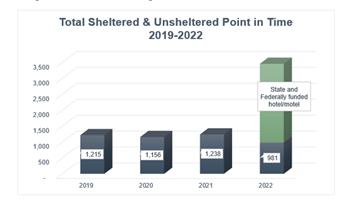 On January 25, 2022, 4,411 individuals were experiencing homelessness in Maine that particular day as identified in Maine’s annual Point in Time Survey.

This number, which provides a one-day snapshot of Maine’s homeless population, suggests a sharp increase from 2021, but also reflects people being served by federally funded pandemic rent relief programs who were living in motels and hotels, a population not counted before because these programs didn’t previously exist.

This increase is also likely reflective of a surge in asylum seeking immigrants, largely from war-torn African countries, seeking asylum in the U.S. and a safe life in Maine. This group of people also accounts for a significant increase in the percentage of people of color who were experiencing homelessness on the night of the survey.

The 2022 count, conducted in partnership with Maine’s Continuum of Care, which dozens of entities that serve Mainers experiencing homelessness, appears to reflect the negative economic impact the COVID-19 pandemic and a lack of vacancies in the housing market have had on Maine’s lowest income and most vulnerable populations.

The number, however, is also not fully comparable to previous Point in Time Surveys, which did not include the count of people being housed with federal pandemic relief funding under MaineHousing’s Emergency Rental Assistance Program (ERA).

As of Wednesday, May 11, the ERA program had covered $18.6 million in hotel and motel lodging expenses for 1,694 unique households accounting for about 11 percent of the $170 million that has been paid to landlords for ERA clients since the launch of the program in March of 2021.

The 2022 Point in Time count also includes people in transitional housing, counting them as currently experiencing homeless, a segment that has been excluded in the reporting on previous Point in Time Surveys.

This annual Point in Time Survey is required by the U.S. Department of Housing and Urban Development. The results help define the dimensions of homelessness in Maine and are used by service providers, and particularly the state’s Homeless Continuum of Care, to develop strategies to appropriately direct what resources are needed in local communities to prevent and end homelessness.

The Continuum of Care includes former and currently homeless individuals, advocates, service providers, governmental agencies and businesses who work together to provide a full range of emergency, transitional, and permanent housing and services to individuals and families who are experiencing homelessness or who are at risk of that.

It should also be noted that this count reflects homelessness on one day of the year; the actual number of people experiencing homelessness at any point throughout the year is considerably higher.  Last year’s unduplicated count for the entire year ending June 30, 2021 was 5,485, and that was considered to be an undercount due to not including people in emergency hotel placements. People working in the homeless arena expect the number to be only higher this year, based on what they are seeing in shelters, hotels, and outside.

“We expected to see a sharp increase in the number of people experiencing homelessness this year from this count.  We’ve been able to serve so many people in hotels with emergency rental assistance.  However, these aren’t just numbers.  Each number represents our fellow Mainers and many people fleeing to Maine for a safe second chance at life for themselves and their families.” said MaineHousing Director Daniel Brennan. “This information will help inform our ongoing work of overhauling our homeless response system, work that was underway before the pandemic hit, and remains in progress today.”

Brennan said part of that work involves a more robust system of collecting and maintaining data, as part of regional system that includes regional coordinators in nine parts of Maine with the goal of quickly connecting those experiencing homelessness with the resources they need to obtain stable, long-term and affordable housing.

Cullen Ryan, who serves currently as president of the Maine Continuum of Care Board of Directors, said the biggest concern people serving this population are seeing is the lack of places for them to go.
"Shelters are full and overflowing into hotels, and that is compounded by a lack of housing placements," Ryan said. "People are becoming stuck. The affordable housing crisis is clearly affecting people experiencing homelessness. And no one is better for not having housing.”

Ryan also said that there is hope that the actions of the Legislature and the Governor will help MaineHousing have the resources necessary to solve the problem.

“We just can’t allow Maine to become a state where people try to live outside because they can’t afford or find places to go,” Ryan said. “We must set the bar higher with adequate shelter and housing to solve this problem.”

Of the people who were counted as being homeless during this survey, 3,276 were sheltered, either in an emergency shelter, including hotels and motels, while 164 were unsheltered, staying in cars, tents, abandoned buildings, outside or in other places not suitable for habitation. Another 956 individuals in the count were in transitional housing.

The 2022 count reflects 1,073 children under the age of 18, while 1,734 people self-identified as having behavioral health issues, including serious mental illness and/or a substance use disorder.

A more detailed breakdown of Point in Time Survey information can be found online at the Point in Time page of MaineHousing's web site.

©2022 MaineHousing. All Rights Reserved.
MaineHousing does not support or endorse external links.